This weekly blog feature hosted gracefuly by elizzy91 from readbooksandfallinlove is all about quotes.
You list the lines from the books you are currently reading. Give the thoughts to those lines. 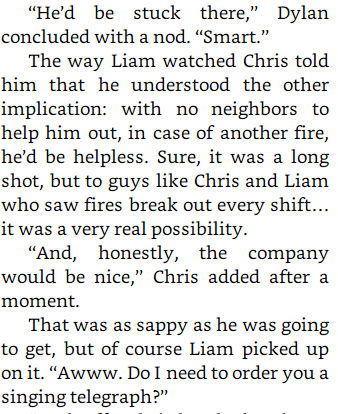 Uhuuh, I love when people are helpful and you KNOW it leads into more. ❤ Really great that we see how Chris’ character is. ❤ Such a lovely hero. 🙂

Also love the humorous innuendo between Liam and Chris. 🙂 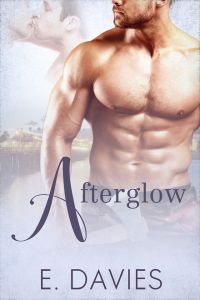 “I’m not used to people being nice to me for no reason.”
“You’re lonely, too.”

Chris Black, a firefighter in Santa Barbara, is finally out and trying to make up for lost time. He has no trouble finding men, but their first dates end behind his bedroom door. Nobody sticks around except his ex, who leaves him feeling rotten after every booty call. Being passed over for a promotion thanks to his loud mouth is another blow. Most of all, it’s coming home to an empty house that’s wearing down his optimistic spirits. Answering a cry for help sends him straight to the side of a man who’s his opposite, but everything he wants.

The last glimmer of hope for Ash’s future vanished when he came home to find his now-ex, drugs, and four guys in their living room. With nobody by his side, in a hotel room in the small hours, the fog of depression lifts and pushes Ash into action at last. Standing on the balcony railing, he sees a glimpse of freedom and takes a step toward it. Seconds later, his body and spirit broken, Ash is pretty sure he’s died after all when he sees a gorgeous stranger fighting to keep him alive.

When Ash falls through his porch on the way home from the hospital, Chris can’t resist offering his guest room. Ash will get the help he needs to adjust to his new limits, and Chris will get a friend, even if he wants more. The close quarters push them both to realize life is brighter and more fleeting than they knew. Each man faces danger from within and outside. Can they make it through the flames to fall in love?

Afterglow is a steamy, stand-alone gay romance novel with a HEA ending and no cliffhanger.