I am normally a bit hesitantly with presenting gay romance manga (called boys love, yaoi or shonen ai*) on my blog since I like to specialize on gay romance books. But I also love to share a bit my love for a great german artist/author duo. The two ladies are Anna Backhausen (aka Holzesserin, in english her penname can be translateted as “Woodeater”) and Sophie Schönhammer (aka Salamandra). They produced a boys love manga called Sternensammler (in english: Collector of the stars, Chaser of the stars).

*the term “shonen ai” is a one which is often used in Germany to describe a less sensual, less explicit gay romance manga. I use this term not this way. I either call manga “yaoi”, “gay romance manga” or as the official, in  Japan used term “Boys love”. “Shonen Ai” won’t be used here so it won’t confuses the reader. 🙂

It’s a german production which is published by Tokyopop (Germany). The uniqueness of the manga is not only the story itself it’s also the way of publication. There are five single volumes/chapter which have a larger format and come along with special extra. Every volume have a collector sticker in postcard size, a postcard print (in a very thick paper, more like a canvas but with a rough surface) and a fold out colored poster. The price pro volume is 8 €  – which is maybe a bit expensive for a few people but since the high quality of the single chapter it’s totally worth. 😉 You can buy it on the publisher website or in every bookstore (with having the ISBN). A volume with all five chapter will be published next year, the duo says it’s planned for the Leipzig bookfair (March 2017). 🙂 But the special extra won’t be in the volume as well as the size isn’t this large.

Here is the overview of the cover: 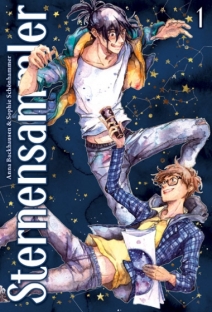 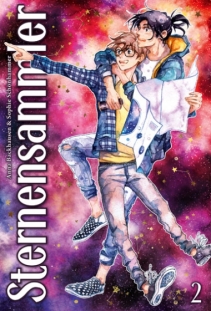 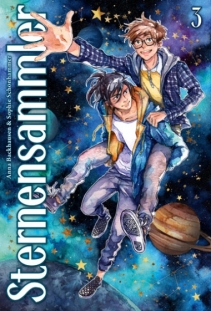 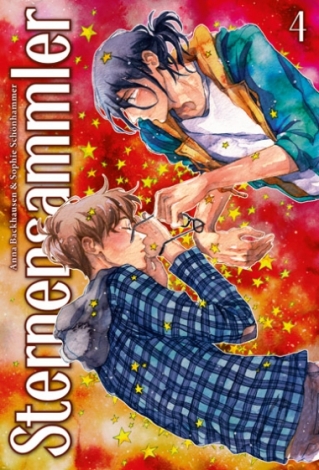 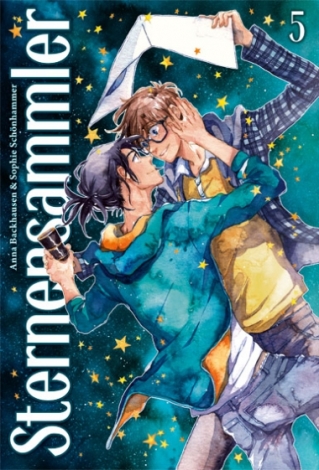 The manga also won the Pochi award on the Connichi 2016.

The plot is fast explained:
Fynn is a guy who is very lazy, smokes a lot and don’t like to go to school (you can also think it’s a university but the plot says school  -guess it’s up to the reader ;)). When his long term girlfriend Zoe breaks up with him he isn’t really happy anymore and the most important: he doubt his sexuality since Zoe advises him to “explore something new”. One evening he notices the shy and bit geeky Niko when he is lying depressed and pissed from his family and weight down by his own heavy emotions on a nearby hill. Both argue first but after a time he is slightly impressed by Niko’s joy and excitement about the stars. Both guys get more and more in contact and meet quite frequently at the hill. Fynn feels connected to Niko but no story without a bit drama. 😉

Although it’s a slice of life manga it’s not boring or – the opposite – too rushed and overdramatically. It has a natural flow, the narrative structure is more than well developed as well as the depths of the character.

The following may can contain a few spoiler. Please be aware before reading. Thank you.

Since the beginning the reader is aware of the potencial of the story and the character itself. Niko isn’t the shy, geeky guy the reader first met. He is also determined and particular forceful. He hides and carries a lot of pain with him and only  – and for the first time –  we get a small insight of his family situation at the end.
On the other side there is Fynn. On the surface he seems lazy, bored and as nothing could infect him. But he is also very emotional and feel sometimes insecure. Since he is more than pissed by his family, mostly by his annoyed little brother and his nagging mother, he has a (nearly) complete family – something Niko is missing. Both guys share the knowledge of being lonely  – but maybe both ways of loneliness is different from each other yet this combines them. Whereas Fynn seems to have a large circle around him, he is still hurt by several things, for example you can totally see the impact the breaking up with Zoe have with him. It’s not easy for him to understand he is maybe attracted to men, have feelings to them. He questions his sexuality and is in struggle. Niko on the other hand has a different way of struggeling, too. He is also mesmerized by Fynn, although he doesn’t show it that openly. He hides behind insecurity, have the fear Fynn will leave him for Zoe…

The sensual scene  – without being too explicit – in the last chapter was one of the best scenes I’ve read recently. You can really feel the emotions, the connection is palpable. As well as the the strong passion and lust for each other but mixed with the fear of the “new”. I also worship in this scene the combination of fragil emotions with humor and witty comments. But underneath the vulnerability of Fynn and Niko. ❤

Sternensammler combines that what I love and adore about manga as well as good narrated books. The structure is very planned and neat, you recognize as reader there is a well developed plot behind. It has its climaxes, the suspense is there without being over the top or too flat. It also feels natural to see Fynn exploring his new feelings and the “foreign” part of his sexuality  – it’s somekind poetic to be with him along this way because it gives you also a insight of a few things.
It’s also understandable why Niko is keeping the distance at some point as well as Zoes hurt feelings and sadness is realistic. All the character’s emotions are transported due to a great way of narration which is a combination of expressive but yet sometimes calm pictures and a neat structure without having too much or too less text. The style itself of the drawings is simple but it works the best for the manga. There isn’t the need of having perfect lines and totally detailed backgrounds. The simpleness which could be maybe a reason for putting another book down is the strengh of this manga.

The story tells its own story in pictures, the words only carry them and give the reader a grounding. I’m more than delighted to be able to read such a great story from a German artist/author duo. It’s also impressive how much the german manga scene have improved and that we can’t really tell which work is from Japan, China, Korea or Germany (I include to this also the Austrian artists).

I can highly recommend this story to everybody. It’s a shame this manga doesn’t have an english version (yet). 😉 But I guess even people who don’t speak or understand german would get the message of the story. I can also help to translate the pages if someone want to read it and have bought the german volume. 🙂 I can give a small review of the single chapter. 🙂 Please feel free to contact me directly. 🙂

Hope you liked this review. 🙂 I wanted to give you a insight of a part of my life I love. It has have a huge impact of my way of reading since I start reading manga when I was eight years old. 🙂 So, it is nearly two decades part of my life. 🙂