My fellow reader, I can proudly pronounce my review in this blog tour about Jay Northcote’s Watching and Wanting, the fourth book in the Housemates series. :3

Watching and Wanting by Jay Northcote
My rating: 5 of 5 stars

Shawn is adrift. Recently graduated, he’s stuck in a dead-end job that barely pays the bills. His girlfriend dumped him, his friends have moved on, and he’s still in Plymouth—going nowhere.

Jude is a student living in the same shared house. Out and proud, he’s everything Shawn’s been running from since he hit puberty. When Shawn discovers Jude works as a cam boy, he can’t resist the urge to watch one of his shows. It makes Shawn want things that scare him, yet his fascination forces him to confront his attraction.

Keen to explore his bicurious side, Shawn suggests they do a show together. Jude agrees, and things get complicated—and kinky—fast. But Jude isn’t looking to get involved with someone so deep in the closet. If Shawn’s going to get what he wants, he needs to find the courage to stop hiding from himself and be honest about who he is.

Wow, wow, wow. Different than the other books in the series, because it contains more kink and is… uhm, rougher sometimes, but wow. Amazing.

This book is also very different because it is really awesome to see how Shawn finds his significant other. And Jude is hot. :3 As Jay said in an interview the fact that Shawn got his book was quite unexpected and it is interesting to see him change from the first encounter to this book.

We know Shawn as a guy who isn’t really fond of the lovey-dovey and open affections of his other housemates which he has to “endure”. He is grumpy because of his break up and need a lot of time to admit to himself that he is more intrigued to feel what his housemates feel when they are with their male partner.

I never had expected that Shawn would connect to a guy which is working as a cam boy and shows off for thousand of viewers. The cam boy aspect in the book give the series a kinkier touch, when the second  – Like a Lover – and third book Practice makes Perfect were out I thought the series wouldn’t toppped with unconventional story plots. It is so different from the business like relationship in Like a Lover or the sweet, spiced with an unexperienced hero and the sexual encounters as in Practice makes Perfect. Yet it is perfectly fitting in the whole series because even the first book was very different than other in the gay romance genre.

What I really liked was the difference between the on camera-action and the off camera action. Shawn is totally struggeling and we see him insecure. He doesn’t know what to do, what to feel about his interest in his housemate. He wasn’t never confronted with these kind of emotions and so a great mix of guilt, interest, anticipation and sensation are building up.

I really liked that Jay created a character you weren’t very fond of at the beginning of the series but who behaved naturally and honest, the raw feelings shown in this book let you judge him differently than in the other books. He is vulnerable and he is sweet, something you didn’t expect. Also is Jude a good counterpart of Shawn and his fierce behaviour is different from the one Shawn often shows… Also is their agreement on the roles in the sexual scenes very interesting and reveal a lot about their preferencs. 🙂

The continuation of the series is also well done, still you can without doubt read the book without knowledge because the focus lies on Shawn and Jude… The other people are presented but the needed information are given.

I am so excited to read the next book about Ben, because the topic of this book is even more different and I am so looking forward.

Have a look at the great cover. 🙂 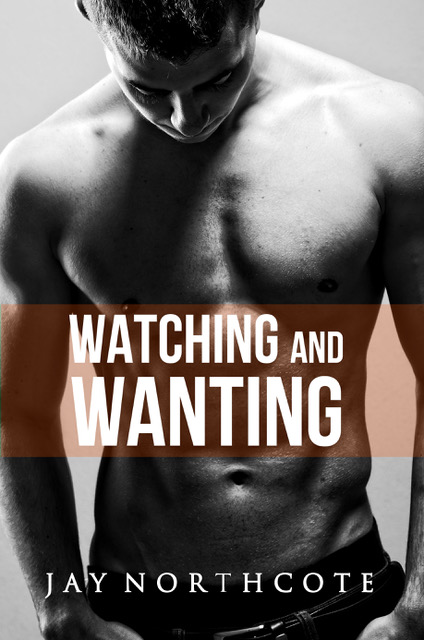 Add to you bookshelf:
Goodreads

And to read two awesome excerpts (one is NSFW, so be warned ;)), look at this release blitz I posted ealier on my blog. 🙂 Get yourself ready for this book. :3

The other participants of the blog tour. 🙂 Have a look at their blogs. 🙂 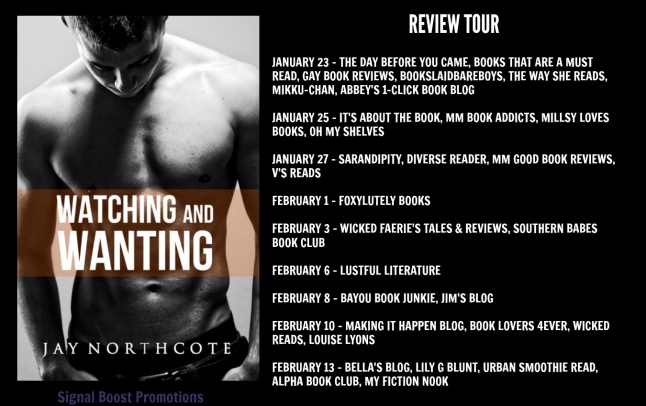 One thought on “Blog Tour + Review: Watching and Wanting”