I am thrilled to celebrate the latest release – The Dragon CEO’s Assistant by Jenn Burke, author of The Gryphon King’s Consort and the Not Dead Yet series.

The Dragon CEO’s Assistant is the second book in Jenn Burke’s Golden Kingdom series trilogy and as the title suggests it’s about a dragon shifter, Nassim, and his assistant, Aidan, who lost all his memory and suffers from amnesia – a fact not just to his own dismay but Nassim’s too.

This post includes a giveaway, so you have the chance to win a really cool price – the giveaway is open internationally. Be sure to join this. 🙂 It also contains my review and an excerpt.

PS I also participate in the Instagram tour on 10/31, so check out my Instagram account (and if you like my content, following me is really appreciated :D) as well as the other tour participants. Just be sure not to miss the hashtag then. 🙂 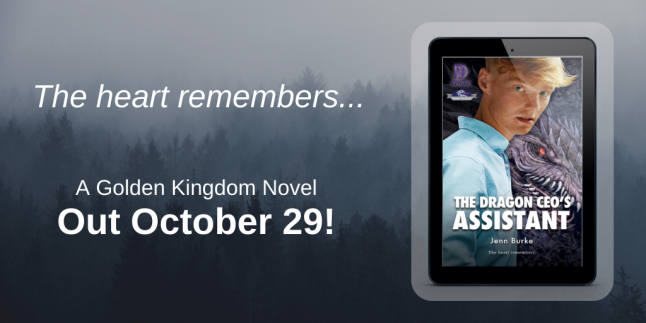 When Aidan Bishop staggers out of the woods, naked and suffering from amnesia, he needs to relearn who he is and where he fits in the world.

His boss, nearly five-hundred-year-old dragon Nassim, head of a successful tech company, hurries to claim his wayward assistant and guide him back into the life he disappeared from. As they get to know each other again, Aidan wonders if their relationship went deeper than employer and employee. But Nassim isn’t telling, and Aidan has a secret of his own… even if he doesn’t know it yet.

A CLANG of a pan, chased by a muffled curse, nudged Aidan to full wakefulness the next morning. He lay in bed a moment, half-remembered thoughts—dreams? memories?—racing into nothingness as he looked around the room. Sunlight crept past the edges of the blinds, but it was tough to say what time it was.

There had been dinner at some point. Aidan woke up enough to join Nassim in the kitchen and slurp soup out of a bowl, but he couldn’t say what sort of soup it was or even if he wore a shirt to the table.

On the plus side, he felt much better after hours of solid sleep, uninterrupted by nurses and tests.

He stumbled across the hall to the bathroom, relieved himself, and considered his still-unfamiliar face in the mirror as he brushed his teeth. Fully rested, he felt more capable of facing the world and all of its uncertainties. Really, all he could do was what Dr. Singh had advised—live his life. Or, well, discover his life was the first step, he supposed. He knew his name, and for the moment, he wasn’t alone.

It was a start.

He went back into the guest room—his room—and spotted a notebook on the desk and pens in a cup. His fingers itched to pick one up, so he gave in to the urge, flipped the notebook open, and wrote Aidan Bishop at the top of the page. He could make a list of everything he discovered about himself, and maybe it would help on the days where the world didn’t seem so conquerable.

The first thing he wrote?

It made him grin because, yes, itemizing his thoughts felt right.

Living his life didn’t seem quite so insurmountable. It wasn’t going to be easy—oh, that was something else to write down.

Moving forward was going to be a challenge, but he could do it.

He tapped the pen against the paper for another couple of seconds, but another crash from the kitchen prompted him to abandon his list. It would be there later.

He wandered down the hall, stretching, only to freeze midextension at the sight of Nassim on his knees, his ass in the air as he searched a bottom cupboard for something. The image of round, muscular buttocks, firm handfuls under thin heather-gray sweatpants, with no underwear lines to mar the fabric, made his mouth go dry. And his groin tingle.

“What?” Nassim jerked up and smacked his head into the top of the cupboard. Curses in a language Aidan didn’t know spewed from his lips. It didn’t make him any less hot.

Aidan raced back down the hall and into his bedroom and skidded to a stop in front of the desk. Breathing hard, he wrote another line in his notebook.

The Dragon CEO’s Assistant by Jenn Burke
My rating: 5 of 5 stars

Without reading The Gryphon King’s Consort before I smashed myself into this book and was captivated from the first page and let out a happy sigh when I closed the book.

I simply adored the Amazing writing, the mix of page-turning events and a story brim-ful with captivating characters. From the blurb we know that Aidan, assistant to a dragon shifter CEO is suffering from amnesia and lost all his memories – a fact that’s utterly devastating not just for Aidan but also his bos Nassim, who seems to has his own reasons to help Aidan remembering.

When I first opened the book I expected a hot shifter story but I got so much more: the characters came to life while reading, they felt like old friends and I had to stop myself highlighting too many great parts. XD I could easily imagine hanging out with them, in the pretty chilling atmosphere of the work place Aidan is having the position of being Nassim’s assistant. The whole workplace feels welcome and like a small family – an aspect I already loved in the books in the Not Dead Yet series – the ccamaraderie is so heartwarming and sweet it almost hurts. ❤

This feeling is even more fortified by the undeniable chemisty between Aidan & Nassim. Later they also have a pretty heated argument which I loved – since it totally showed the emotions and feelings of these two characters.

What I haven’t excpected – though with hindsight it should have been clear – were the surprising revealings about Aidan’s loss of memories. It’s hard to summarize the last part without spoilering, I’ll simply hint that Aidan isn’t what he seems to be – and that’s not just shocking for himself but Nassim too.

This book was a journey and I loved every part of it. Though the book is connected to the The Gryphon King’s Consort it’s totally possible to read it as a standalone; we have later a reappearance of some of the previous book’s characters.

5 out of 5 stars for this book I wholeheartedly recommend.

Jenn Burke has loved out-of-this-world romance since she first read about heroes and heroines kicking butt and falling in love as a preteen. Now that she’s an author, she couldn’t be happier to bring adventure, romance, and sexy times to her readers.

She’s been called a pocket-sized and puntastic Canadian on social media, and she’ll happily own that label. Jenn lives just outside of Ottawa, Ontario, with her husband and two kids, plus two dogs named after video game characters…because her geekiness knows no bounds.

There is a giveaway for a great prize:

Win a amazing prize package for the “The Dragon CEO’s Assistant” release!
Including a black dragon plushie (just as grumpy as Nassim!), a signed paperback copy of The Gryphon King’s Consort (the first book in the Golden Kingdom series) & a killer bunny pin