I celebration of Amy Aislin’s latest release called The Nature of the Game I have a really cool post prepared for you.:3

Read further for the Exclusive Excerpt, also check the post out to get the chance to win a really cool price in the giveaway. Be sure to join this. 🙂 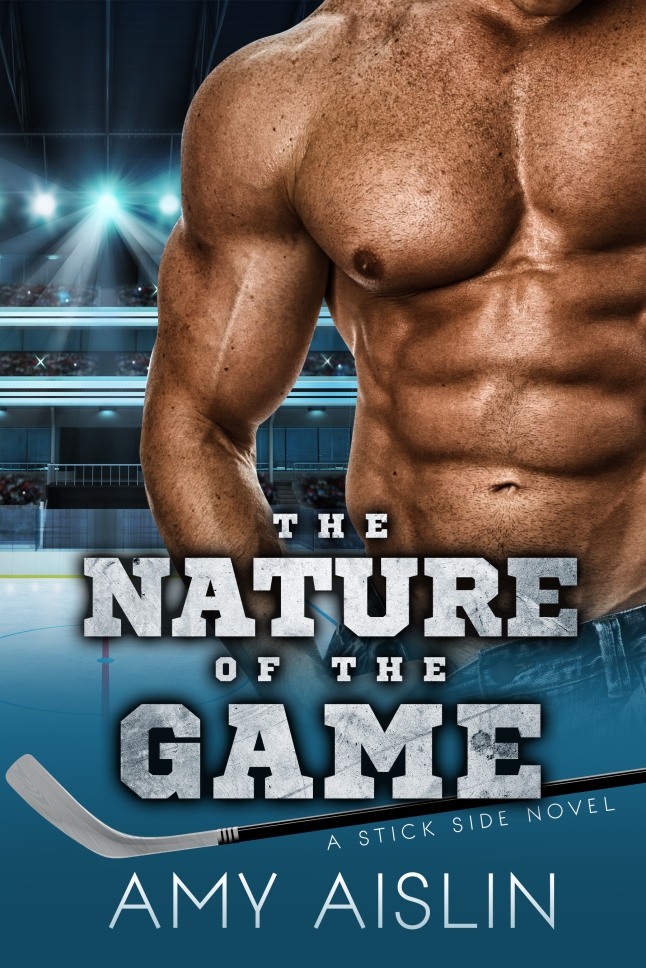 Six years ago, an ultimatum forced Dan Greyson to make a choice that cost him everything he loved most. One of those things? His boyfriend, hockey player Ashton Yager. Now that they’ve crossed paths again, Dan isn’t about to let the opportunity slip away. Ash’s reappearance in his life is just the catalyst Dan needs to escape the rut he’s fallen into…and win back Ash’s trust and love.

Ashton Yager, once burned and now a little bit shy, didn’t mean to publicly come out as bisexual. But now that he has, he’s got to deal with the consequences, including the fact that it might’ve cost him his NHL contract. With his job on the line, he needs to keep his head down, work hard, and play the best hockey of his life. Rekindling things with Dan? That’s not exactly keeping a low profile. It’s also never going to happen, not after Dan walked away once without an explanation.

When a hurricane forces Ash to seek shelter out-of-state, he and Dan find themselves in the same B&B, where old feelings resurface. But with everything Ash has on the line, does he dare play with fire again? 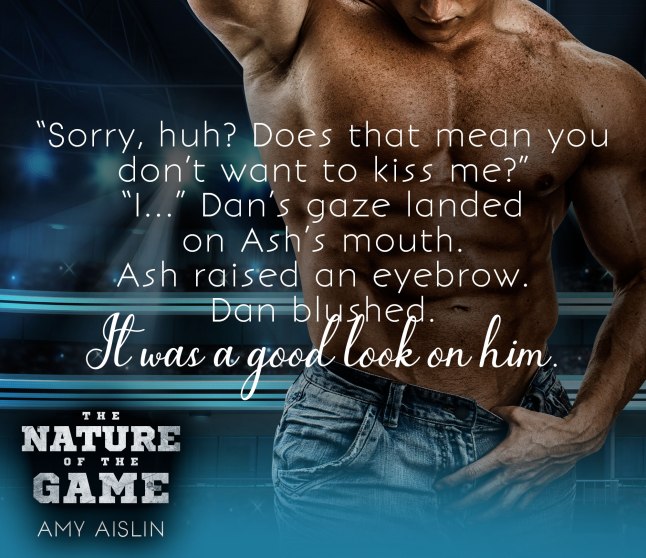 Thank you for joining me to celebrate the release of my newest m/m sports romance, The Nature of the Game, and thank you to Mikku-Chan for having me!

The Nature of the Game is a second chance romance. Six years ago, the main characters—Ash and Dan—were in a relationship that didn’t end well. They haven’t spoken since then and now, all of a sudden, they’re back in each other’s lives.

Today, I’m sharing an exclusive excerpt from The Nature of the Game. For context: this excerpt is from the opening scene and is when Ash and Dan see each other again for the first time in six years.

“Of all the bookstores in all the world,” a voice said, “you happen to walk into mine.”

Dan whirled, pulse skyrocketing, and there he was—Ashton Yager, in the flesh. Or in a lovely charcoal-gray tailored suit with a lavender shirt and shiny black loafers, as it were.

Dan’s knees turned to water. He was unable to blink. Unable to breathe. He was swimming in regret and lost opportunities, and it kept him frozen in place.

“Yours?” he managed to croak.

Lips twisting wryly, Ash hitched up one shoulder in a half shrug. “You don’t know that it isn’t.”

Dan might’ve purposely avoided seeking Ash out since he arrived, avoided looking too closely at the hockey players for fear that he’d spot Ash’s six-four bulk and huge shoulders and be unable to do anything but stare, but he’d been prepared to see him. Had been psyching himself up since Alex had invited him to this book launch weeks ago. And yet, the butterflies on crack that erupted in his stomach were still a surprise.

Who was he kidding? He was so not prepared, and he was sure the expression on his face conveyed everything he was feeling, starting from his hesitancy to the joy that made him light-headed and made his fingers tingle.

Though that could’ve been the claustrophobia talking.

The look on Ash’s handsome face, however… Stupefaction, anger, confusion. Maybe a hint of pleasure? And a whole lot of what the fuck are you doing here?

Ash had started going prematurely gray a few years ago and now, at twenty-seven years old, he had a full head of gunmetal gray hair. But his eyebrows were still the chocolate brown Dan remembered, and they rose high up his forehead as Dan watched him try to add up one and one to arrive at two. Because from Ash’s perspective, one and one was adding up to a giant what the fuck.

Dan stepped toward him, pulled in by those eyes of his, an unremarkable shade of medium brown with unique tawny-colored marbled undertones that only became apparent in close range. Extra close range.

Ash crossed his arms over his chest, biceps and shoulders making the material of his suit jacket stretch taut. He was as big as he’d been six years ago. Except for his lower half, which actually appeared bigger, if that was possible. The NHL had clearly been good to him.

“What are you doing here?” Ash asked. By the tone of his voice, he might’ve asked Dan why he’d poisoned the water supply.

Not an auspicious start.

Dan threw his shoulders back. “Mitch is my brother.”

“Your…” Comprehension dawned, Ash’s eyes going wide. He gave a tragic-sounding chuckle. “I never put that together.”

“Why would you? Greyson’s a pretty common last name.” Rallying, Dan rubbed his chest over his slowing heart rate, intent on . . . something. Getting Ash not to look at him like he was something vile underneath his shoes? “You look good, Ash.”

Ash cocked his head. “And you look like you’re about to pass out. Can I buy you a coffee?” He gestured at the bookstore’s coffee shop a dozen steps away.

Dan really should head back to Mitch. He was here to support him after all. Well, he was here to support Mitch’s boyfriend, which was basically the same thing. But it was so stuffy over there, too many people packed into a small area. The coffee shop, on the other hand, was currently empty.

Ash grunted and led the way into the coffee shop. “Don’t thank me. I don’t want an ambulance showing up at Alex’s book launch.”

Amy started writing on a rainy day in fourth grade when her class was forced to stay inside for recess. Tales of adventures with her classmates quickly morphed into tales of adventures with the characters in her head. Based in the suburbs of Toronto, Amy is a marketer/fundraiser at a large environmental non-profit in Toronto by day, and a writer by night. Book enthusiast, animal lover and (very) amateur photographer, her interests are many and varied, including travelling, astronomy, ecology, and baking. She binge watches too much anime, and loves musical theater, Julie Andrews, the Backstreet Boys, and her hometown of Oakville, Ontario.

There is a giveaway to win a Stick Side prize pack, including signed paperbacks of books 1 and 2 in the series, as well as some Stick Side swag! Contest open internationally. Enter via Rafflecopter. Contest ends at 12:00am May 12.