I am excited and so happy to have you here. Today I not only share my release blitz post of Kelly Jensen’s third and final book in her This Time Forever series, Chasing Forever with you. I also have a nice guest post.

Author Kelly Jensen is here today and talkes about Brian, our hero in the book and how much it meant to her writing his book and telling the reader his story. Lets give her a warm hello. :3

Read further and you can have a sneak peak of the book with the cool excerpt. And while you’re there, be sure to participate in the giveaway at the end of the post. 🙂 Good luck.

Let’s hear what Author Kelly Jensen has to say about her main character Brian who isn’t the loveliest person in the first book of the series and some reader might have a mixed opion about. 🙂

So, About That Guy, Brian

If I had known how much readers would dislike Brian in Building Forever, I might never have planned a book for him. So, I’m super glad I wrote the last two books of the This Time Forever series in a vacuum, one pretty much after the other, about a year before publication. I did know going in, though, that writing Brian would be a challenge. Redemption stories always are.

There were two important elements to planning Brian’s story. The first was that I didn’t want to offer any excuses for his behaviour toward Simon and the eventual dissolution of their relationship. Reasons, yes, but not one that could be issued like a ticket and stamped with forgiveness. That meant that I had to show that the relationship wasn’t a good fit. Brian’s cheating is totally on him and he takes full responsibility for it. But it wasn’t because he didn’t love Simon. More, he didn’t know how to commit—and I put some of the blame for the continued cycle of cheating and forgiveness on Simon’s shoulders. He didn’t walk away. Infidelity is a hard subject to cover and every relationship is different. But it does take two people to make a relationship successful. Unfortunately for Simon and Brian, Simon didn’t know how to ask for more. But, Simon does learn this skill with Charlie, and Brian… well… not all is lost.

The second element of planning Brian’s story was making him likeable. I already liked him. I didn’t know exactly what made him tick, but I sensed he was a lost soul and there is nothing a writer likes more than to find a soul and stick it in place—and then introduce it to its mate and watch them live happily ever after. I really did fear that there was nothing I could do to make my readers actually like Brian, though, because I’m not so sure he really liked himself. I decided to make that his arc: to give Brian a reason to try, to become more, to become someone we could truly admire. Arrogance aside, there is little more attractive than a person who likes themselves, who is comfortable with their lot in life, and ready to share that constancy with someone else.

So, I tossed Brian’s nephew Josh onto his couch on Christmas Eve and gave Brian and Josh the chance to alter the narrative. Josh’s story is eerily similar to Brian’s, which allowed me to show why Brian might have difficulty not only committing to a proper relationship, but to being himself. Coincidentally, the plot revolving around Josh slotted neatly into my plans for Mal—he needed to learn to live out loud, and standing up for the LGTBQ youth in his home town is the perfect way to do that.

Watching Brian chase and fall in love with Mal was one of the highlights of this series. On the surface, these two appear to have little in common. But beneath, they’re carrying old wounds, and both are looking for a new direction. This is the beauty writing mature characters—not the angst of baggage, but in having characters that have been there and done that. They’re more confident in some ways, more vulnerable in others. Their happy ever afters always mean more to me because they’ve come such a long way. They deserve it.

Outside of the redemption of Brian and the revolution of Mal, with Chasing Forever I wanted to tell a story about community and the importance of gathering together to support our youth. They are the best of us, and Brian in particular characterizes what can happen when we don’t care for our children. I worried that my message might be too heavy—I’m known for writing fluff and I do love my fluff. But this book moved me to reach for new depths and I’m glad I responded to the challenge, because this, to me, is a truly beautiful story that shows how we’re never too old to change, to become, to fall in love, and to learn to love ourselves.

You liked this guest post as much as I did? Good, scroll down for more information about the book, read the cozy excerpt and don’t miss the giveaway. :3 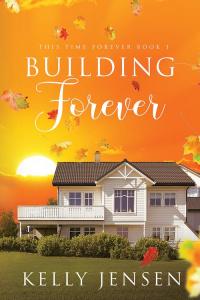 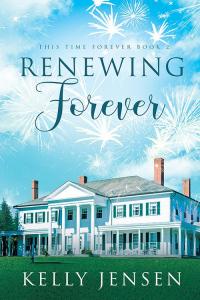 Old wounds, new directions, and a forever worth chasing.

Malcolm Montgomery was a history teacher and track coach until an accident left him with two broken legs. He’ll recover, but life has knocked his feet out twice now. He’s not sure if he’s ready to try again, especially when it comes to love—and slick guys like Brian Kenway. Still, he needs help mentoring the school’s LGBTQ society, so he asks Brian to take some responsibility.

Brian has been hiding behind his reputation as a liar and a cheat for so long that he actually believes he’s that guy—until his nephew, Josh, turns up on his couch, tossed out for being gay. Brian has never considered being a father, but he knows all about being rejected by loved ones. Now Brian wants to be more: a partner for Mal and a role model for Josh.

But when Mal’s recovery is set back and the sad truth of Brian’s past is revealed, the forever they’ve been chasing seems even further from their grasps. It’ll take a rescue effort to revive their sense of worth and make Brian, Mal, and Josh into a family of their own.

Mal checked the time. What the heck—it was New Year’s Eve and he should get kissed.

Brian followed his gaze, clearly checking the time for himself. “Want to wait for midnight?”

“There’re probably a dozen other guys in this bar who would give their left nut to talk to you. Why are you bothering with me?”

“Because you unsettle me.”

Brian smiled, and Mal let his lips curve upward in response—because Brian was right. Heck, yeah, he was uncomfortable and it wasn’t because his legs ached. Or the creeping fatigue from PT. The knowledge that even getting to the bathroom was a journey he had to plan. He wondered, then, if he should grab his crutch, pull it out of the shadow of the bar, and show it to Brian, and quickly realized that if he did, he’d be making another excuse. Besides, he didn’t want to have sex with Brian tonight.

But he wasn’t going to have sex with Brian tonight. Brian Kenway obviously enjoyed playing games and much as Mal suspected he’d enjoy a night in Brian’s bed, he knew it would probably be a one-off thing. No one put this much intensity into friendship. Brian saw him as a hookup. Nothing more.

Mal didn’t do hookups. Since his breakup with Noah, he’d preferred loneliness to the sharp disappointment of connection and separation, or the simple fact that people so often weren’t who he thought they were in the light of day.

He glanced at the clock over the bar. “Three minutes.”

Brian showed him another grin, this one not at all lazy. “Need some practice puckering up?”

“Fuck you.” Resisting the urge to stretch his lips, lick them, get all loose and ready for a kiss, Mal laughed. Then licked his lips, damn it.

Brian chuckled softly and raised his glass for another sip. He did it slowly, as though knowing Mal would watch him swallow and wonder what the drink would taste like on his lips. His tongue.

“Want a taste?” Brian asked, offering him the glass.

Mal accepted the glass and took a quick sip. The drink was strong and his head spun lightly. Putting it aside, he licked his lips again, tasting bourbon and something sharper, drier. Vermouth? The bitters touched his tongue last, a tangy aftertaste, and he could imagine how well an orange peel would go with the drink.

He was wondering how Brian managed to smell like oranges when the countdown began.

Brian hadn’t leaned in. Should he do it?

Should he take his glasses off?

What if he missed?

Oranges, cardamom, cinnamon, and musk. Warmth whispering across his lips in quick invitation before pressing down, lightly, without demand. Somehow their noses didn’t collide. Somehow, Mal’s lips were parting before a swipe of Brian’s tongue.

Brian didn’t invade, though. He teased. He waited.

Understanding flashing inside his head like a cracked blind at dawn, Mal leaned in and kissed back. Offered up his mouth. Tasted. Hummed at the delicious flavor of whiskey and man. The persistent hint of orange. The prickle of stubble as their mouths moved and realigned. He touched his tongue to Brian’s and opened his mouth. Brian swept inside and the warmth at the back of Mal’s neck now must be Brian’s hand. Oh God, it felt good.

Then Brian was shifting back, blinking slowly, and noise crashed into the perfect bubble of their kiss, breaking the moment apart with cheers of “Happy New Year” and the lambent strains of “Auld Lang Syne.”

Mal breathed. Quaked. Ignored the near pain behind the fly of his jeans. Took another breath. “That was . . .”

“Some kiss.” Brian’s grin had that lazy aspect again. If aliens ever do land on Earth, Kelly will not be prepared, despite having read over a hundred stories of the apocalypse. Still, she will pack her precious books into a box and carry them with her as she strives to survive. It’s what bibliophiles do.

Kelly is the author of a number of novels, novellas and short stories, including the Chaos Station series, co-written with Jenn Burke. Some of what she writes is speculative in nature, but mostly it’s just about a guy losing his socks and/or burning dinner. Because life isn’t all conquering aliens and mountain peaks. Sometimes finding a happy ever after is all the adventure we need.

There is a giveaway to win any ebook from Kelly Jensen’s back catalog!