happy to have you here. I’m so happy to share my release blitz post with you, which includes my review.

Read further and you can have a sneak peak of the book with the cool excerpt. And while you’re there, be sure to participate in the giveaway at the end of the post. 🙂 Good luck.

Building Forever by Kelly Jensen
My rating: 5 of 5 stars

Covers are obvious a thing that catches the reader’s attention. This cover did it because of its uncommon way: where we have mostly covers with guys (in several states of being dressed or undressed) in the MM book community this book has a property, a magnificend house, as cover motif which is not often used. The way how vibrant the cover is – the nice orange tone and the swirling leaves, the green lawn in front of the beautiful building with the nice, white frontage, catched my attention right from the start.

No wonder the book piqued my interest and even more when I read the blurb.

For me, this is the first book by the author and I can see Kelly Jensen is very good in executing amazing, sometimes hilarious characters and giving them charme and their unique traits.

The reader is shown what kind of character Charlie is; he is presented as a sunny, vibrant guy, full of life and laughter. He’s charming and slightly hilarious. I had an bright smile – right instantly – when I read the opening scene.
But within the book it becomes clear Charlie isn’t always the easy-going guy; he’s a father of a teenage daughter who he loves to the moon and back; as it’s called in the book, his life rotates around his daughter, she’s his reason he’s getting up in the morning and who he has on mind before he fells asleep. Being a widower, having a great loss of his beloved wife – and for Olivia her mother – it’s not easy to keep the parenting on point.

I loved how the author was able to equally displaying the ups and downs in Charlie’s life; not everything is beautiful and easy, in fact in Charlie’s life there’s a lots of stuff going on, his upcoming and deepening feelings for his adorable new neighbour isn’t someting he had on his plate at all!

Simon and Charlie have a great chemistry and I really loved how they become a unit. The book has its slightly dramatic parts; one was indicated in the blurb and had more impact to Simon, the other was not necessarily a surprise since you’ve suspected it but the way Charlie reacted to it was… It broke your heart and on a fundamental level I could relate to him so well; Charlie is faced a lots of things throughout the book and it’s only natural he hasn’t always the same strength.

The book was so well in displaying that these people, Charlie as well as Simon, but also the charming side-character like Olivia, Charlie’s daughter, Frank, Simon’s best friend or even Charlie’s best friend since childhood Phil, have burdens and problems. It is realistic with ugly parts but it’s charmig and light and funny too therefore I just can recommend it wholeheartedly. 🙂 5 out of 5 stars for it. 🙂

A new town, a new neighbor, and a new chance to build a forever.

Charlie King is doing fine. Sure, he’s a widower raising a teenage daughter who just got her first boyfriend, his book series isn’t writing itself, and he has a crush on his new neighbor — the guy next door. But everything’s just fine.

Simon Lynley is doing better. He moved to Bethlehem to fall out of love and rebuild his career. An affair with his neighbor isn’t part of the plan, but the attraction between them is too hard to ignore.

But when Simon’s ex follows him to Pennsylvania seeking reconciliation, and Charlie’s life starts to feel like a video on repeat, everything comes apart. Charlie worries that he’s failing as a father, and Simon is a distraction he can’t afford. Meanwhile Simon doesn’t know if he could survive being left again, and he hasn’t come all this way to make the same mistakes. But despite their fears, it’s only together that they’ll find the strength to slay old foes and build the forever they’ve been waiting for. 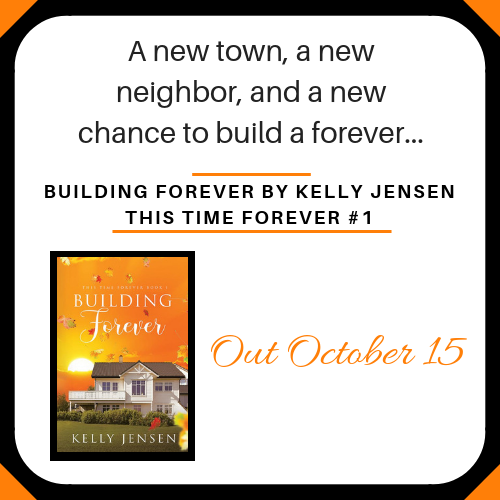 Charlie needed to think his idea through, and that meant putting on his running shoes. His calves complained as he stretched, and his lower back tried to convince him that couch surfing was a better form of exercise. Never mind the fact that Sunday’s post-pancake nap-a-thon was probably responsible for every twinge back there.

By the time he got to the corner, he felt less like a jar of marbles being shaken too hard. When he got to the end of Bierys Bridge Road, his stride had lengthened and his breath had fallen into a regular rhythm. A sort-of path alongside Monocacy Creek meandered all the way into Bethlehem. He didn’t usually run that far, but with as much thinking as he had to do, he needed to put a few miles beneath his shoe soles.

The dense canopy blocked most of the sun, and cool mist rose from the water. Charlie dropped into that space where his legs did one thing, his mind another. He breathed and ran and drifted. The outline of book six floated through his head, a tangled mess. He picked at the snags, one by one, until a couple pulled free. Then his thoughts turned to Olivia and The Boy. Justin. He’d gotten a name on Sunday, but neither a description nor address.

Over the past four days, his imagination had crossed Charles Manson with Donald Trump. Justin probably wasn’t a serial killer or the face of American lunacy, but any man left alone with his thoughts for too long got dangerous and maudlin. He dismissed Manson Trump, and tried to imagine a younger face. An innocent face.

And pictured Simon from next door. Damn, if Justin looked like that, he and his daughter were both in trouble.

Pausing, he leaned against a tree to stretch out his calves and hamstrings again. Bent each leg behind him to loosen his thighs a little. His breathing was good. Not shallow, not ragged. Sweat clung to the back of his neck.

Every time he blinked, he saw Simon’s face.

Then it clicked. Simon loosely resembled Jory Ondel—or close to how Charlie had imagined him, anyway. Jory was the hookup from book three. Charlie remembered the twist in his stomach when he’d submitted the pages to Shelly. He’d fully expected her to veto the idea, but she hadn’t. She’d loved Jory. His subplot had been great.

The idea of bringing Jory back, of expanding his story, was curiously exciting. What Charlie couldn’t decide was whether he liked it because of his own curiosity about Simon, or if Jory represented something deeper. Something he’d put aside nearly eighteen years ago upon hearing the words: I’m pregnant.

A breeze tickled the sweat at his nape. Charlie pushed off the tree and started running back the way he’d come. By the time he got home, he had a new plan for book six. A plan that rekindled his enthusiasm for Kaze and his retirement.

If only life was as easy to plot. 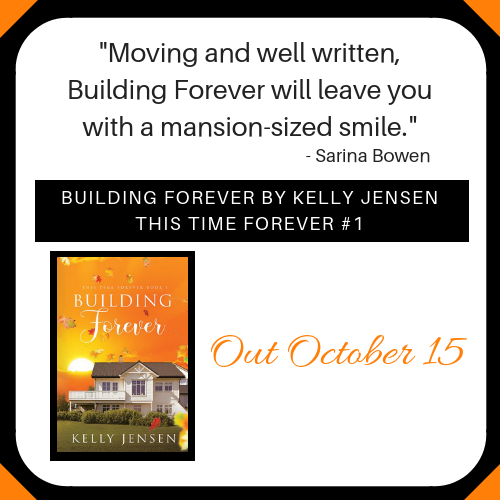 If aliens ever do land on Earth, Kelly will not be prepared, despite having read over a hundred stories of the apocalypse. Still, she will pack her precious books into a box and carry them with her as she strives to survive. It’s what bibliophiles do.

Kelly is the author of a number of novels, novellas and short stories, including the Chaos Station series, co-written with Jenn Burke. Some of what she writes is speculative in nature, but mostly it’s just about a guy losing his socks and/or burning dinner. Because life isn’t all conquering aliens and mountain peaks. Sometimes finding a happy ever after is all the adventure we need.

There is a giveaway to win one signed paperback copy of Block and Strike by Kelly Jensen.