I’m happy to have you here today for my review of  Anna Martin’s latest book Lone Wolf, an amazing shifter paranormal romance.

It’s a pity this is one of the rare reviews I only can give the book 3.5 stars. I loved the premise of the book but unfortunately the characters, mainly Jackson didn’t make it easy to be likeable, let that you start to love them. His internalized homophobia and total rejection of his feelings for his mate Leo, who’s on top also a human, is difficult to endure.

Partly I get Jacksons vehement rejection having a male mate; he’s having a picture of an alpha wolf in his mind, he can’t have feelings for a man, since he has pictured his future with a family to build, not having feelings for someone who’s seen as someone lesser in his community.
And where I see his gentle feelings breaking through like a silver lining on the horizon – and accepting in ways Leo as his mate and partner –  it’s painful to see how he thinks it’s something abnormal and considered as something sinfully to be with Leo.

On the other hand we have the talks about what it means not to be with his fated mate and I think, in combination with what we know from Jackson, how he feels – he is really an untypical wolf shifter, which living seperate to his pack, other wolfs and even if he is close with his family, he loves his freedom -it’s born out of his way of living and not knowing it better.

The book might have been a bit better if we would have seen a bit stronger fightback from Jackson, a bit more acceptance that his mate is a human and a man; I also think a bit too many subplots where included in this book and I have the feeling it could have worked better if we had this as a small series; if this gets a sequel I actually hope the characters are getting a bit more depth and loose a bit of their reluctance.

Jackson Lewis isn’t a typical werewolf. He isolates himself in a small town outside Spokane and dedicates himself to making his business—Lone Wolf Brewery—a success. If it leaves him little time for romance, he’s okay with that. His soul mate could be out there somewhere, but he isn’t actively looking.

So he’s in for quite the shock when he literally bumps into his soul mate—Leo Gallagher, an adorable, nerdy, vibrant music therapist who’s Jackson’s polar opposite.

Jackson is straight—or at least he’s always assumed so. Though he can’t deny his attraction to Leo, it’s a lot for both of them to deal with.

While Jackson and Leo figure out what their future might hold, they face prejudice from both the human and werewolf communities—including a group of fanatics willing to kill to show humans and werewolves don’t belong together. 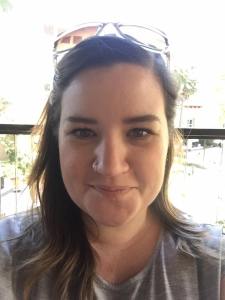 Anna Martin is from a picturesque seaside village in the south west of England and now lives in Bristol. After spending most of her childhood making up stories, she studied English Literature at university before turning her hand as a professional writer.

Apart from being physically dependent on her laptop, Anna is enthusiastic about writing and producing local grassroots theatre (especially at the Edinburgh Fringe Festival, where she can be found every summer), visiting friends who live in other countries, Marvel Comics, learning new things, and Ben & Jerry’s New York Super Fudge Chunk.

Although her most recent work is in the LGBT Adult Fiction genre, in the past Anna has worked on a variety of different projects including short stories, drabbles, flash fiction, fan fiction, plays for both children and adults, and poetry. She has written novels in the Teen/ Young Adult genre, Romance, and Fantasy novels.

Anna is, by her own admission, almost unhealthily obsessed with books. The library she has amassed is both large and diverse; “My favourite books,” she says, “are The Moonstone by Wilkie Collins, To Kill a Mockingbird by Harper Lee and Oryx and Crake by Margaret Atwood.” She also several well-read copies of Michael Crichton’s Jurassic Park books and re-reads the Harry Potter novels with almost startling regularity.

Anna claims her entire career is due to the love, support, pre-reading and creative ass-kicking provided by her closest friend Jennifer. Jennifer refuses to accept any responsibility for anything Anna has written.