I’m thrilled to be one of the blogs promoting the cover reveal including an excerpt of Change For You by Crystal Lacy.

It is the second book in the Oahu Lovers series but can be read as a standalone title. 🙂

See this post for the amazing cover, the blurb & an excerpt. :3

But enough of the preamble, let us finally take a look at the amazing cover. Here we go…

And here it comes, the amazing cover in its full grace! Tell me below what you think of it. :3 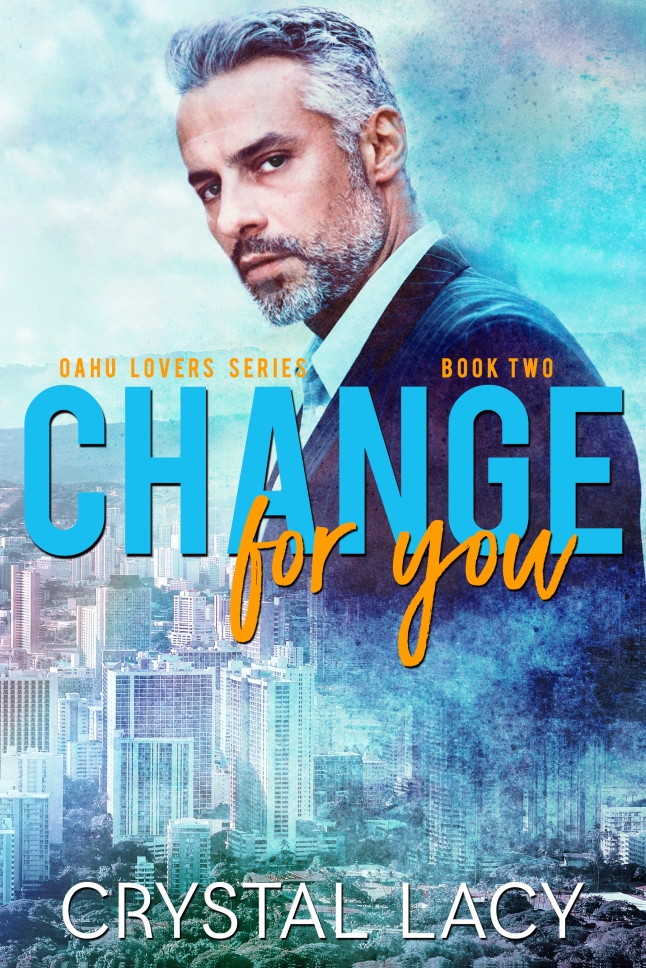 Stephen Webb has a pivotal tax season ahead of him and he doesn’t have time for distractions. At least that’s what he thinks—until Minoru “Max” Kamigawa walks into his life and disrupts all his plans.

Max secretly wants to follow his love of music, but family obligations keep him rooted in Hawaii. Tax supervisor Stephen Webb makes his spring internship a little sweeter, but the man’s priorities don’t seem to include Max. Is it only a fling or something worth staying for when his dreams come calling?

Stephen and Max must decide whether to stick to their goals or risk everything and change their course for love.

A May-December MM romance with a HEA and no cliffhangers set in Honolulu, Hawaii.

“Are you trying to seduce me?” Stephen asked savagely. His grip on the shirt he’d found for Max was so tight he was sure there would be wrinkles in it when Max put it on.

Max appeared completely dumbfounded by the idea. “What—No!” He was hanging onto the towel which had become untucked around his waist and was now held up only by his hand—and possibly by sheer willpower on Stephen’s part. “Unless… Is it working?” There was a hopeful note in his tone.

“You didn’t dry yourself very well,” he growled. There was still water dripping from Max’s hair, glistening along the smooth planes of Max’s chest and stomach.

Stephen nodded, his eyes moving from Max’s stomach up his chest to the exposed line of his neck, where the flush began. “I could leave.” That was exactly what he should have done. His mind screamed for him to do it, but his traitorous body remained frozen there, only a couple of feet away from the shower.

Max swallowed; Stephen could see his Adam’s apple moving. “You could stay. Help me dry off.” Max’s voice was light and casual, but when Stephen’s eyes flicked to his face he caught a look of shock which suggested Max hadn’t meant to say that. He was all impulse and no control, this boy.

Stephen felt his own self-control slipping away in the face of blatant temptation. He dropped the shirt he was holding onto the floor and took another few steps closer to Max, extending a hand.

Max stared down at it, making an inquisitive noise.

“The towel,” said Stephen, and was glad his voice wasn’t as unsteady as he thought it would be. “How am I supposed to assist you without one?”

“Oh,” Max said. He swallowed again, then reached down and grabbed the towel without breaking eye contact with Stephen. He dropped it into Stephen’s hand. It was damp and a little warm from the heat of Max’s body.

Stephen brought it up and pressed it against Max’s chest. He scrubbed at the residual water there, then swept up to his shoulders. Max let out a sigh as Stephen brought the towel down, scraping the fibers over Max’s flat stomach. His hand paused there for a second.

“What the hell am I doing?” It wasn’t an actual question. Stephen couldn’t even pretend he was under the influence of alcohol this time. He couldn’t last time either; he’d spent the entire week since his tryst with Max completely distracted, turning over and over in his mind everything they’d done that night and trying to ascertain if he could really blame it on the alcohol. The conclusion he’d reached was he hadn’t been nearly drunk enough in the kitchen that night. Not enough to be absolved of guilt.

He wasn’t drunk at all now. Neither was Max, which was the important thing.

“Drying me off, remember?” Max said thickly. “You could continue. You left that door open—I could catch a chill.” Possibly to emphasize his point—or maybe because Stephen’s hand was curving around his torso to his back—Max shivered. He moved closer so Stephen could reach behind him. Stephen brought the towel up, making a cross with his hand across the expanse of flesh, starting from the tip of his shoulder blade and reaching downwards to the small of Max’s back, then up again to the opposite shoulder.

When Max’s back was sufficiently dry, Stephen drew the towel lower. He heard a soft hiss from Max, who let his head drop onto Stephen’s shoulder.

“I think I can manage the rest,” Max breathed. His wet hair dripped water onto Stephen’s shirt. Stephen could feel it seep into the fabric and settle, cold on his skin. “I don’t want to get you wet. Unless you want to take off your clothes, too.”

Stephen’s hand clenched involuntarily over the towel on Max’s ass at the words. Max turned his head so his mouth was just an inch away from Stephen’s neck. He moaned, his hot breath suffocating.

“You already got me wet,” Stephen said. He didn’t think he managed to keep his voice steady this time.

Max reached out with damp hands and touched Stephen’s collar, fingertips gliding over the buttons. “Can I?” he asked. “You didn’t get any tea on you. No excuse to change shirts.”

“No reason to, if we both behave. And we’re going to.”

A small, frustrated sound came from the back of Max’s throat. “Are we?”

Stephen nodded. He used both hands over the towel to massage the flesh of Max’s buttocks, a finger over the towel snaking into the crease to wipe away any water lodged there, then gently ghosting over Max’s balls.

“Shit,” Max gasped, body trembling. “You trying to punish me?”

“Do you admit you’ve done something wrong?”

A chuckle shook Max, vibrating against Stephen’s shoulder, and Max brought his hands up to steady himself with a gentle touch on Stephen’s upper arms. “I’ll admit anything, if you just—”

Max moved his head a fraction so his lips just brushed the lobe of Stephen’s ear. “Make me come,” Max whispered. The words—and the proximity of Max’s lips to his skin, made chills run down Stephen’s back.

He drew his arms back, and for the first time glanced down at Max’s cock, fully aroused and flushed beautifully, a few droplets of water still clinging to the smooth, delicate skin. He drew in an admiring breath. It would feel so good to have Max’s thick cock inside him. He imagined himself on top of Max, riding out his orgasm and listening to Max moan as Stephen squeezed around him.

Max’s eyes widened in surprise, but Stephen noticed that his cock twitched as he complied. Thanks to Stephen’s efforts, Max’s back was mostly dry now. Stephen felt no qualms—except for the vague ethical ones he was resolutely ignoring right now—in pulling him forward so he leaned against Stephen, his back to Stephen’s chest. Stephen curled his left arm around Max, hugging Max to him.

“Don’t slip,” he warned. He tossed the towel aside, curling his right hand around Max’s cock and stroking him in a firm, steady rhythm. 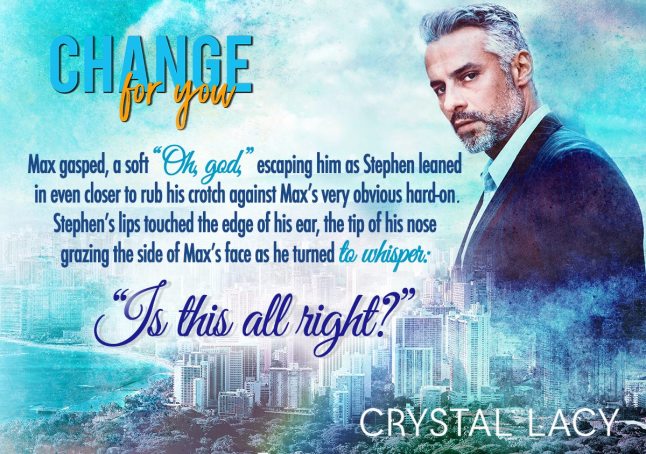 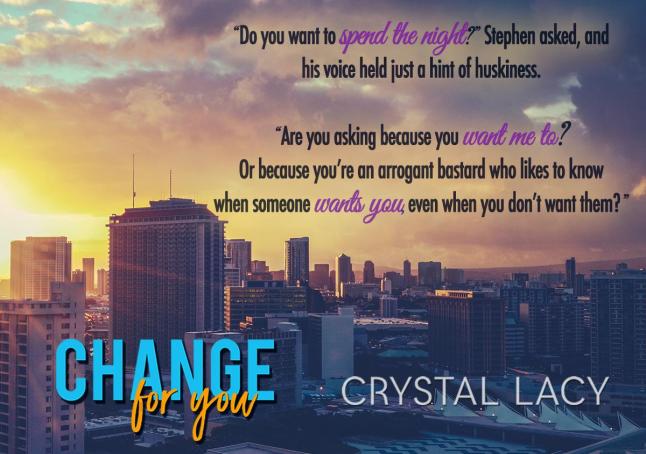 Brave for You (Oahu Lovers Book 1) 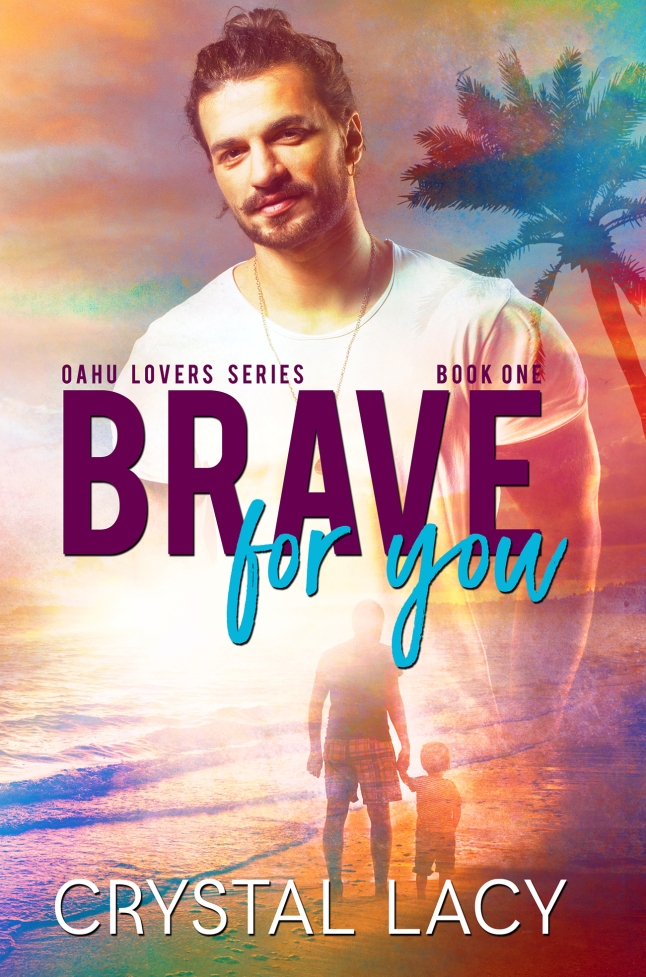 Crystal Lacy lives with her loving family in Hawaii, where it is always either drizzling or sunny and never snows—which is a shame, because she prefers being cold to being damp and hot unless it’s for Very Good Reasons. She writes queer romance, mainly M/M, but also some F/F. She has aspirations to one day write a YA novel about cats.

Crystal is a long-time fangirl and writes slash fanfiction for the Harry Potter and NBC Hannibal fandoms under the name crystalusagi. She has a deep love for fandom culture, and can be frequently spotted on Twitter and Tumblr reblogging pretty fan art.

One thought on “Cover Reveal & Excerpt: Change For You by Crystal Lacy (w/ giveaway)”