I’m super excited to share my review of the latest release by Kasia Bacon, Twenty-One Arrow Salute, book 2.5 in the Order Series. Read further for a small excerpt. :3

Also don’t miss the giveaway at the end of the post. 🙂 Happy reading. 🙂

Twenty-One Arrow Salute by Kasia Bacon
My rating: 5 of 5 stars

When I say I adore this series, it’s actually not enough to capture my excitement everytime I hear about and then later pick up a new novella or short story in the Order series/universe. 🙂
Kasia Bacon hookes me with her writing, her amazing skills – she’s like a wordsmith –  and this book is marvelous as the last ones. But, again, so short and I need more. 😉

Not only is the author able to capture you from the first page, no, the characters have a pretty dominant voice, a strong appearance, even if you met them for the first time and are pretty new characters for you besides of a brief mentioning.
I’ve to stress out at this place that the book has only one point of view, written in first person past tense. We explore the events and feelings along with Verhan, our fierce archery teacher of Hernan Seinnés, the adorable, slightly freckled redhead, outsider in a bunch of Dark Elves, not only because of his heritage and origin but his appearance too.

I loved how these two characters were displayed, how we saw enough about Hernan, although it was pretty single minded. Hernan is a sweet soul, untouched, innocent, comes across as pure – and Verhan is in his utmost urge to protect and hold him tight.
It broke my heart to read about Hernan’s past, his relationship with his father and his family in general, but loved how Verhan was sweet and compassionate.

The dynamics in the teaching lessons are great; there’s a great deal in describing the archery process, the way Verhan is explaining it makes it even understandable for the unknown reader, and the funny dialogues and the genreal banter between Hernan and him, but also between Verhan and Achiah were amazing and I cracked up so many times. 😀

Some would call the novella uneventful, and besides the teaching lessons, preparing Hernan for the big day, for his role as Honour of Guard at the Queen’s Nameday, a day full of tournaments, fairs and festivals, it’s true there isn’t much action, at least pretty different from the other books, where there’s preparation of battles or military strategies discussed. But it’s actually more than that and in this book the focus definitely lies on the character development or – in better terms – in the revealing of Verhan’s feelings for Hernan. 🙂 It’s adorable as sometimes heartclenching seeing him acting pretty uncharacteristically and nervous, as well as furious and jealous. 😀 I was totally and fully engaged with it and how was I rooting for both until the end.

This book was super sweet, great addition to the amazing series and the way it ended… well, no spoiler here but I definitely NEED more of the two guys. 😀 5 out of 5 stars for this. :3

An archer’s heart is a hard target to hit…

Freshly enlisted in the Highland Regiment, he does all he can to steer clear of responsibility and commitment. Just not his cup of mead, that. Loose of tongue and even looser of morals, he rarely misses an opportunity to get into trouble—and into the other archers’ knickers, too.

In a unit composed almost entirely of Dark Elves, Hernan Seinnés, with his green eyes and auburn hair, is an outsider. When Verhan, up the creek again, is blackmailed into helping Hernan, he never expects to fall for him. But during the long hours spent training Hernan for the Honour Guard, feelings strike the Highlander right in the heart—and with the force of an arrow.

Unversed in relationships, Verhan finally plucks up enough courage to tell Hernan how he feels, only to drive the Asirhwӱnian away instead. If Verhan can swallow his pride, he might get one last chance to show Hernan what he means to him—and maybe this time he can hit the mark.

Taking a step too wide, Hernan faltered at the very end, finishing the last form atthe wrong angle. The error turned his stance rigid, his poise evaporating before my eyes.

“Not bad. For an Asirhwӱnian,” I grinned and winked. “Let’s repeat it a few more times without stopping. I want to try something. Close your eyes and picture the forms in your mind. I’ll be behind you, guiding your steps, alright?”

Slowly, I approached him from the rear and placed my hands on his hips.

That first time I touched him, my heart downright assailed my rib cage, beating out a rhythm violent enough to cause me internal damage. To my dismay, I felt more riled up by that innocent contact than the last time I had my trousers around my ankles and a bulky sergeant pressed against the wall. Silently swearing, I tried shutting down those thoughts and refocusing.

And so we moved in a half circle, gliding through the air, in tune with one another.

The sweet spiciness of his scent reminded me of darhê. Hyperawareof the warmth emanating from his body, I lost all sense of time. It might’ve been a few minutes or an hour before we came to a stop.

As if bewitched, both of us remained still. It was Hernan who eventually turned his head to the side. He looked up at me over his shoulder.

The air seemed to shimmer around him, the edges of my vision distorted. I took in his smooth, flushed skin embellished with a few freckles. His slightly parted lips, plump and rosy. His wide, pale eyes, as green as a forest fern. All the colours that defined him filled me with a sense of wonder.

See the other blog tour participants 🙂 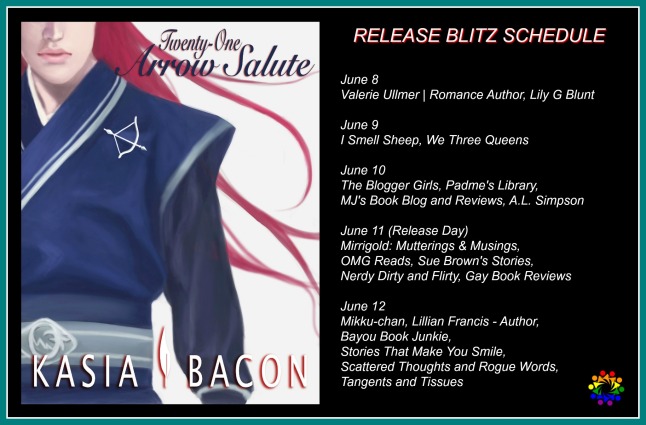 A linguist and an avid reader with a particular fondness for fantasy and paranormal genres, KASIA BACON lives in London with her husband. When not tearing her hair out over a translating project, she writes stories about the shenanigans of emotionally constipated assassins and sexy Elves. Otherwise, she can be found shaking her loins at a Zumba class, binging on anime or admiring throwing knives on Pinterest. She has a mild coffee and lemon tart addiction. A lover of MMA and Muay Thai, she also enjoys nature and the great outdoors. She dreams of becoming independently wealthy, leaving the city and moving into her wooden mini-manor—located in the heart of stunning forests resembling those of the Elven Country depicted in her tales.

There is a giveaway to win one of five ebook copies from Kasia Bacon’s backlist, including the new release.