My dearest, lovely readers. I hope you have had a great start in the day so far? Well, let me make it even better with an exclusive excerpt of Layla Reyne’s  Medley.
It also includes my review.

Also read further that you won’t miss the chance to win an amazing prize at the end of the post. 🙂

I am also a host in the Instagram tour, so check out my account on May 4 and the ones by the other particpants. 🙂 See the hashtag #MedleyRelease for awesome photos. 🙂

Medley by Layla Reyne
My rating: 5 of 5 stars

I don’t exaggerate when I say I held my breath (pun intended; points to exclusive excerpt ;)) when I read that the burly, dreadlock wearing, tattoed butterfly swimmer Bas – short for Sebastian –  and the team’s pup, nineteen year old first Olympic swimmer Jacob got their book. ❤

Right from the start did I loved these two guys and their extraordenary chemistry. I can’t say when but somewhere in the first book, Relay, I fell in love with them. That both got their HEA, even if it took a while, is balm for my romantic craving.

Jacob stole my heart right from the start, with his funny pirate talk, his innocence but – when he wants – steadfast behaviour and tough manner, and of course his cute looks. I cracked so hard when I read about his hair. XD I bet I can never look at Chia pets like this again. xD
Jacob surprised me with his maturity in taking care of a dear family member, the way how he reacts in stress situations and how he sometimes appeared calm & collected but then shows his vulnerable sides and what he really wishes.

Bas is a pretty interesting character, sometimes I wanted to grab him & shake him because of his overprotective mode towards Jacob and which caused a lot of problems and misunderstandings. He means well but his own insecurities prevent that he is able to see what’s directly in front of him – until he nearly loses it.

The book had a great pacing, well balanced between the sports aspect, the competitive swimming in the Olympics. The book continues the major events from book one, Relay, but it’s possible to read it as a standalone but I would advise to read both together. 🙂

One of the major topics next to the sports topic is the sexuality of the guys. The bisexuality representation was satisfying and the way it was talked about catched up a few problems some of the (side) characters had in the book and focussed for a short time of the prejudices and wrong assumptions some have about bisexual people in general.

5 out of 5 stars for it. I am a bit sad the duology is now complete, I really wish we can see the boys again. ❤

Sebastian Stewart was never Mr. Dependable; he was more the good-time guy who only wanted to swim, party, and ink tattoos. Until he cost his team the Olympic gold four years ago. Bas is determined to do right this time around—by his medley relay team and his rookie mentee.

Jacob Burrows is in over his head. The Olympic experience—from the hazing, to the endless practices, to the unrelenting media—makes the shy nineteen-year-old’s head spin. He’s trying to be everything to everyone while trying not to fall for his gorgeous tattooed teammate who just gets him—gets his need to fix things, his dorky pirate quips, and his bisexuality.

When Jacob falters under the stress, threatening his individual races and the medley relay gold, he needs Bas’s help to escape from drowning. Bas, however, fearing a repeat of his mistakes four years ago, pushes Jacob away, sure he’ll only let Jacob down. But the only path to salvaging gold is for Jacob to finally ask for what he needs—the heart of the man he loves—and for Bas to become the dependable one.

“How can you be your best when you’re not sure if your best will measure up? That’s the dilemma facing Bas and Jacob, as they deal with the immense pressure of swimming for Olympic gold while also trying to sort out their tangled hearts.”
–Layla Reyne

With Medley, Layla Reyne combines love, self-discovery, swimming, and the excitement of the Olympics in to one stellar event. I loved Jacob and Bas’s story. –Anna Zabo, author of Syncopation

Will the race for gold cost them their hearts?

Bas moved in front of him, cutting off his circuit. “Pup, you need to take a second and breathe.”

Jacob’s chest rose and fell faster, green eyes filling with panic. Not on the verge, then; already gone. Bas stepped closer, and Jacob slammed into reverse, backing into the wall. Bas kept coming, not letting up. He lifted his hands and grasped the sides of Jacob’s face, holding him steady.

Mint green dimes snapped to him, but Jacob’s breaths were still too fast and short. His brain needed to move past the panic so his body could fall in line.

“Your cousin, Josh, is taking care of him?”

He nodded again. Another short inhale.

“Josh is a psych major, right? You said that the other day.”

“Okay, someone’s got your father, then. Multiple someones.” Bas inched closer, bodies brushing as his thumbs swept over Jacob’s cheeks. “Your dad’s gonna be fine. He’s safe, and so are you. I’ve got you, you’re not alone, but I need you to breathe, baby.”

Jacob’s eyes fluttered closed as he choked on a strangled breath.

“You can do it,” Bas said. “Just like we do in the water. In and out.” Bas exaggerated his own breathing so Jacob could feel the rise and fall of his chest, could hear the exchange of air, could mirror both with his own.

Bas continued to breathe with him until Jacob’s chest no longer heaved. “That’s got it,” he said, moving to step back.

Jacob’s hands shot up and wrapped around Bas’s wrists, holding him in place. When Jacob’s eyes opened, they were no longer brimming over with panic. They were the warmest shade of cool green Bas had ever seen. Molten mint. Impossible, and yet right there in front of him, scorching.

As was the single word that passed through his parted lips. “Stay.” 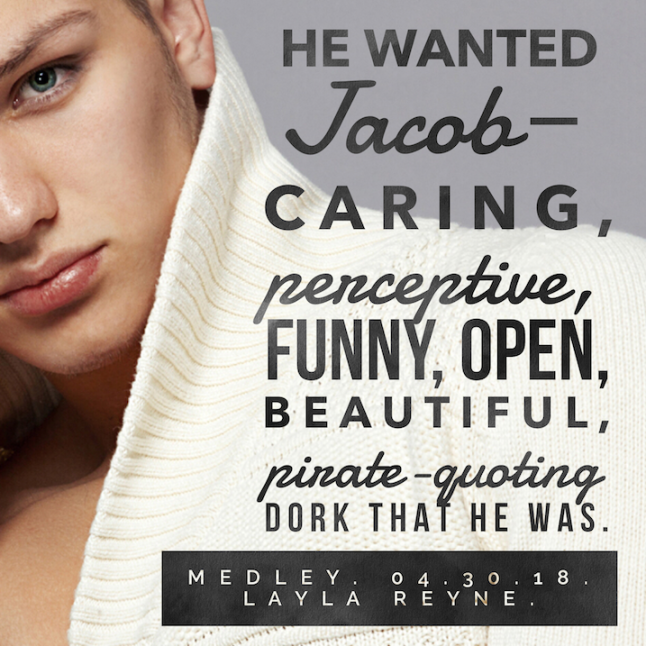 Author Layla Reyne was raised in North Carolina and now calls San Francisco home. She enjoys weaving her bi-coastal experiences into her stories, along with adrenaline-fueled suspense and heart pounding romance. When she’s not writing stories to excite her readers, she downloads too many books, watches too much television, and cooks too much food with her scientist husband, much to the delight of their smushed-face, leftover-loving dogs.
Layla is a member of Romance Writers of America and its Kiss of Death and Rainbow Romance Writers chapters. She was a 2016 RWA® Golden Heart® Finalist in Romantic Suspense.

There is a giveaway to win 1 of 3 ecopies of any back catalog ebook by Layla Reyne (open internationally!)