This weekly blog feature hosted gracefuly by elizzy91 from readbooksandfallinlove is all about quotes.
You list the lines from the books you are currently reading. Give the thoughts to those lines.

Last week was fun, so of course I love to show in which book I’m currently reading. :3

Haha, guess everybody would be confused by the term “hot mamas”. 😀 Darwin must think of a strange kink Caine has. XD But the reveal is sweet and charming. ❤

Have also a look at my Waiting on Wednesday entry. 🙂 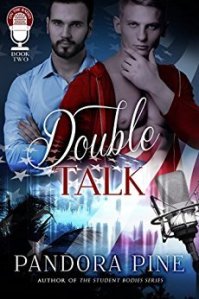 THIS DEBATE IS HEATING UP MORE THAN JUST THE AIRWAVES…

Battling back from losing everything in a scandal that cost him the chance to be elected to the U.S. Senate, disgraced politician Caine Williams is learning to take things one day at a time. The opportunity to host a political talk show, Raising Caine, on PRIDE XM Radio, is the next step in getting his life back.

Up-and-coming Republican political commentator Darwin Edwards is hoping a guest appearance on Raising Caine will give him some national exposure and take his career to the next level. The last thing he expects is such a strong attraction to his annoyingly liberal co-host.

Impressed by the ratings brought in by Caine and Darwin’s broadcast, the powers that be ask Darwin to join the show permanently, and sparks begin to fly between the co-hosts both in and out of the studio.

Can Darwin and Caine learn to work together or will their budding attraction be nipped in the bud before it can evolve into something more?