This is a weekly feature where I babble about my week, things I am happy about. Based on the “Theme Days” in the author – reader Facebook group Hassell & Hall (now called Group H2)

Last week I was a bit lazy and didn’t post my STLS… It had two reason; first I hadn’t really something to tell, second I was at my boyfriend’s house and we enjoyed the rare free days together… >.< ORZ It’s annoying when two people have to do so many things…

At the end of the last week (CW 38) and the start of the new week (CW 39) I received each my pre-ordered/ordered figurine sets. :3 One of them was the Nendoroid Wedding Dress set (a collection of Wedding dresses bodies for Nendoroid figurines), the other was the special edition of the 5th volume of the manga Ten Count with small figurines; I ordered it because I didn’t get the German version when it was up for pre-order. ;__; Now I have my half a year before the German release. \^.^/

But have a look at the great pictures: 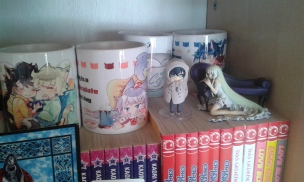 The middle of this week was chilling and relaxed; I finished a series I’ve started to watch last month – it was RuPaul’s Drag Race (I spoke about in this entry about my Top 10 TV-Series :))

I was really impressed by the finale of season 8 because this time the three remaining contestants performed a song based on their image and it contained their features. 🙂

Kim Chi‘s “Fat, Fem and Asian”. Normally I am more into J-pop than K-pop but this song is catchy and I like it totally. She also looks beautiful and the dance is perfect (fun fact: Kim Chi is known in the show for not being the best dancer *smirk*) 🙂

My this week’s STLS (CW 39) is with great relief that my mobile phone isn’t broken \^.^/ 😮 – and yay for being a woman who is able to repair technical things *smirk* #iamproud 😀

Yesterday evening, after a nice day off I had a sudden boot loop of my mobile phone. I couldn’t do anything and thought: damn, are you thing broken, or what? -_-

I asked my father to help me with it and luckily we both could find the error. It was a damaged file which started again and again with the booting process. >.<
We could delete the file after we narrowed the error; we could use the phone when we took out the external memory card, so it had to be the mistake there…
On the PC we could get to the file and delete it. After that, back again in the phone everything was okay. :3 And it’s working. *^*

The only annoying part was the fact that it costs my time and I was awake until 2am in the morning fixing this and had to get up today at 5.50am… >.< Yeah, nice… But I can relax now because I am off work for today (I had a short shift), but tomorrow I have to work, too. ORZ. But the weather is nice and the problem solved so… it’s okay

This was my update of my two last weeks. 🙂
Hope you had a great week, too.