Last year, from september 7th until september 13th) I read this great books:

Dr. Derek Babineaux is intelligent, dedicated, and one of the best ER physicians in the fast-paced world of critical care at Tulane Medical in New Orleans. Always on top of his game, he’s thrown off balance when the newest medical staff member finally unleashes his hidden desires.

Justin Delacroix’s job at the inner city’s busiest hospital might be just what he needs to ease back into civilian life after a long stint in the military. High-performing shifts make working as a trauma nurse at TMC the perfect way to utilize his skills and quick reaction times. There’s only one problem, his attraction for one sexy ER doctor is off the charts, but he has his reasons for not returning Dr. Baby’s night shift advances. Or maybe he doesn’t.

This novella was very sexy. Two men, working in a hospital, the one a nurse the other a doctor. Mamma, what a combination. Mixed with hot scenes and witty jokes on the guy’s lips it was a great but short ride. 😉

I got this book as the single version but it was formerly published in the Night Shift anthology, which royalties went all to a charity. A second one is currently to buy, called Night Shift 2 with the bonus scene of the sequel to Secret which will be published soon.

The Backup Boyfriend by River Jaymes
The Boyfriend Chronicles # 1 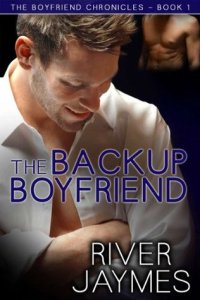 rofessionally, Dr. Alec Johnson has almost reached his goals. As this year’s recipient of a humanitarian award with his ex, Dr. Tyler Hall, Alec’s work with the homeless is about to be recognized. Unfortunately, his personal life sucks because now he has to attend several events alongside Tyler—with his ex’s new boyfriend in tow. In an attempt to lift his mood and break out of his rut, Alec purchases a motorcycle he has no idea how to start.

Dylan Booth doesn’t have time for Dr. Clueless and his fickle 1964 Harley, but the cocky mechanic can’t say no to the request for help. Having spent his teen years on the streets, and losing his best friend to HIV, Dylan decides teaching the do-gooder how to ride is the least he can do. But watching Alec flounder in his ex’s company throws Dylan into protector mode, and the confirmed hetero introduces himself as Alec’s new boyfriend.

The ex suspects Dylan is lying.

And Dylan’s not sure he can fake being gay.

But he’s a master bullshitter, and the phony PDA soon turns ultra-hot. Alec can’t afford to get attached, and Dylan’s learned everyone eventually leaves. Unfortunately, playing the backup boyfriend is starting to feel way too real…

This was my very first gay for you/out for you book. It was so well written, funny and charming with lovable character  – the most time. xD It’s a shame I haven’t heard from the author since her second book… Her FB page tolds she had health problems in her family, hope maybe she’ll continue 2017… Otherwise I can only re-read the two great books in her series… 🙂

As the landlord of The Dragon’s Lair and leader of The Black Dragons Motorcycle Club, Axel Carmichael has seen it all and done it all. He’s a respected and experienced dom. Nothing shocks him any more, and nobody catches him off guard.

When Bayden rides up to The Dragon’s Lair on a bike worth more than most men earn in a year, and immediately demonstrates that he has far more attitude than sense, it’s easy for Axel to write him off as a silly little rich boy who’s about to get himself killed.

But, there’s more to Bayden than meets the eye. He’s no silly little boy, rich or otherwise, and werewolves aren’t easy to kill.

Look up your shelf: what book did you read during this period? Do you remember? 😉 Feel free and tell me if you like. Or tell me if you maybe have read this book too. 🙂